Tried out Electric Plasma Live Wallpaper on HTC EVO WiMAX today, and I uploaded the video I took to YouTube.

Posted by Tsubasa Kato at 3:51 PM No comments:

Recommended Reading: The History of the Floppy Disk

Anyone here should enjoy reading about the humble floppy drive! Credit for the link goes to Engadget since that is where I found it. http://h30565.www3.hp.com/t5/Feature-Articles/The-History-of-the-Floppy-Disk/ba-p/6434
Posted by Mikey Pizano at 6:24 AM No comments:

I want to start a new series of posts here called Random Thoughts, which will be just as you would expect by the title. It will be simply things I wish to discuss, such as current events or ideas I have. This will be something that I post from time to time, but should be more often soon since my work is slowing down and I have more time to work on these posts. The first thing on my mind is all of this stuff going on with Apple and Samsung. This is one thing that has really been getting on my nerves lately, and I am sure that I am not the only one. This is very childish to me, and Apple is just trying to reduce the competition against them. This is the problem with companies like Apple. Sure, the one phone did look like the iPhone, I will give apple that, and the TouchWiz UI did have a similar feel, but there are only so many ways to do a UI. However what annoys me the most of all is that Steve Jobs has been quoted before saying that he is shameless about stealing good ideas, yet that Android stole from Apple and he was willing to go thermonuclear war on Android. This is a simple do as I say, not as I do move by Apple. It is fine when Apple steals an idea, like how they stole the idea of GUI from Xerox. Also, is it really a good idea to piss off the company who provides your flash memory to you? Unless they found a new company, Samsung has provided Apple with flash memory since they introduced the iPod Nano line.
Posted by Mikey Pizano at 11:21 AM No comments: 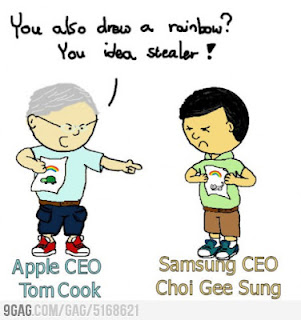 You all know that Apple and SAMSUNG aren't very nice to each other recently.
And Mikey found this on the internet. Well to be honest when I first saw SAMSUNG's Galaxy S (first one) I knew they copied Apple's iPhone 3G/3GS. It was that obvious. But now, Galaxy S III is creating an original world.

Well what do you think?

Leave us a comment of your thoughts.
Posted by Tsubasa Kato at 10:03 AM No comments: 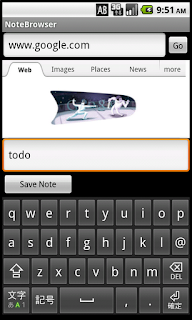 I made a simple app called NoteBrowser, and it is available on Google Play.

Posted by Tsubasa Kato at 6:09 PM No comments:

I found a good Apple ][ video review on YouTube.
Posted by Tsubasa Kato at 5:48 PM No comments:

Posted by Tsubasa Kato at 9:23 AM No comments:

Double (Telepresence Robot using iPad) has shown up on my Facebook NewsFeed and a blog I subscribe to. It's pretty cool. What are you thoughts on this? Leave a comment!
Posted by Tsubasa Kato at 8:20 PM No comments:

Well would you look at this, a post by Mikey Pizano! Turns out that I am not actually dead like some of you might think! Okay I don't think any of you thought I was dead, but I have been busy with work lately, but since I got some new stuff this year, I figured I should take the time to make a new post for a change, and even though August technically isn't over yet, I am going to call this the August Update! I don't want to talk about work here, since I am sure that no one cares about my grass cutting, but it does fit into the whole Classical Computing thing since I like to use old computers to keep my spreadsheets updated. I keep a very detailed one for all the jobs I do and how many hours are on my lawnmower since I added that hour meter to help with stuff like the oil changes, since it says in the manual to change the oil every 100 hours. Lately, I have just been using my main desktop for that task, since I keep it synced up using DropBox, so I can also have it on my laptops and sometimes I like to open the file on my tablet, though Android sucks for spreadsheets. I wish that I could run DropBox on my older computers though, but that wouldn't work well since I have more space on DropBox than the hard drives in those computers. So where do I start? I think it would be best to start with the new stuff I have gotten recently, and I think it would be best to start with the oldest one I got first, which I also happened to get first as well. My friend in New Jersey sent me his sister's old Toshiba laptop. The model is a Tecra 750DVD. I plan to write a review of it when I get a chance as well, so I don't want to spoil too much before I can get that review done. Since I have had more time, I can finally start doing it. I don't have a lot of time though. The Tecra is a Pentium MMX laptop, which shipped with Windows 95, running at 233MHZ. I installed Windows 98SE to make it more useful though, and since it has 160MB of RAM, which is maxed out, it runs well for most uses. It also has a 5GB hard drive, as well as DVD ROM drive. This was the first laptop to ship with a DVD drive, and when it came out, it was $5,600! The laptop is pretty thick, and for its age, the battery still holds a charge since it was replaced at one point. I can tell that it is not the original simply because of the label. It is not a OEM battery, but it works, however I haven't tested it to see just how long it lasts, since I normally leave this one home. 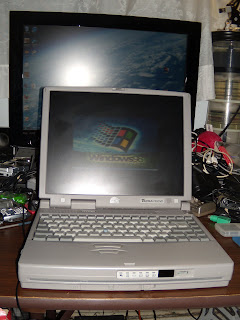 The next thing that I got was a Compaq Pressario SR1055CL desktop. I built a new computer for my neighbor and I was given the old desktop as part of my payment. This is still a work in progress as I just got it on Thursday, however I do have Windows XP installed, as well as all the updates, but not much software I need yet. When I get a chance I will need to install the usual things like FireFox, DropBox, and Pidgin. That will make the computer much more useful, and I might even install Linux on it! This desktop isn't very modern, as it was made in 2004, but it does have an AMD Athlon XP 3000+, which is a 2.16GHZ single core processor, as well as 1GB of RAM. It has a 160GB hard drive as well. I don't really know what else is in this computer really, but I will probably do a review on it one day I bet. There is not a whole lot to say about it right now so I will move on to what I am typing this on. 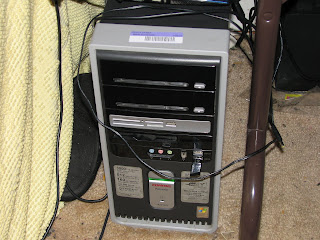 The last modern laptop I had, besides my netbook, was my old Toshiba A205-S5859, which is no longer working. It suffered many weird problems, but that is all in the past. The new laptop I am using now is a Sony Vaio. It is not a new model, but it is new to me. It is the N320E model, and it is really nice. I plan to review this one as well, so here is a quick rundown on it as well. It uses the Pentium Dual Core t2060 processor, which is really a Core Duo with half the cache, running at 1.6GHZ which is good for me. It has 2GB of RAM and a 120GB hard drive. I installed Windows 7 on it and it runs great! 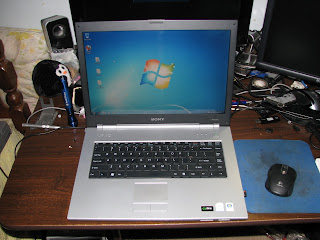 Finally the other little things I got this month include another Palm Treo, this time a Sprint branded 700p, a Dell 17" LCD with a built in 4 port USB hub, and a HP LaserJet 1100 printer. I got the Treo with the 2 computers, and the LCD and printer were from a flea market at a church picnic. The LCD was 25 bucks and brand new, and the printer was 5 dollars with a spare toner, which appears new, though not the HP brand, was only 2 bucks! 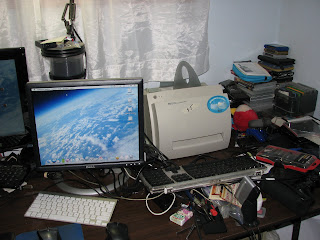 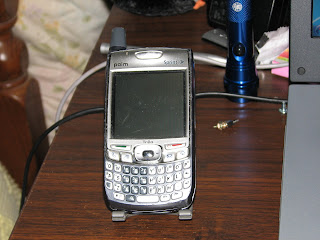 The black Softbank SIM card was used in my iPhone 3GS. The b-mobile is a MVNO using NTT Docomo network, so it says "FOMA". 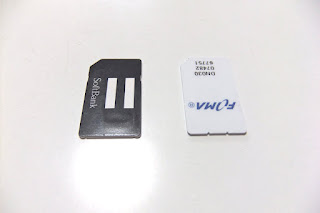 Posted by Tsubasa Kato at 8:50 AM No comments: