Well, my thoughts about my newly bought Sony Vaio VGN-UX50.

First impression: "oh wow, this device is rather fat!" lol.

The keyboard is really tiny, wish they had made it a few millimeters bigger, as my hands are too big to really use it well. BUT, I'm getting used to it. Typing with my thumbs will be probably the best method.

There is a microphone plug and stereo out, which is quite good. The fact that it packs in Bluetooth and Wifi in this small device makes me smile.

Posted by Tsubasa Kato at 10:10 AM No comments: 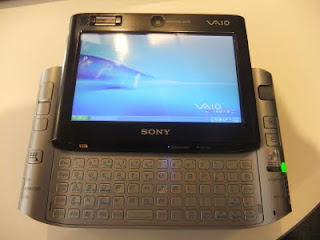 I'll be giving impressions on the device later.
Posted by Tsubasa Kato at 3:57 PM No comments: 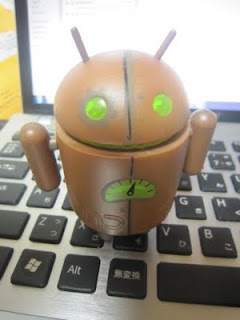 Posted by Tsubasa Kato at 8:26 AM No comments: 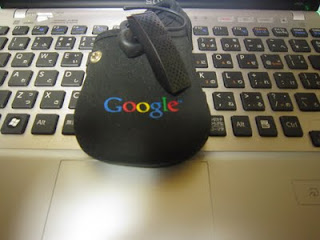 I love how JAWBONE ERA supports A2DP on only one side of the ear.
The Google cellphone case was a present to me several years ago.

Speaking of gadgets, I'm planning to get a new toy today which is rather old, but not too old. Keep checking for updates!

Posted by Tsubasa Kato at 6:45 AM No comments:

Pretty useful if you own the Japanese Wifi cards.

Thanks, Mikey
Posted by Tsubasa Kato at 6:40 AM No comments:

Here are the pictures I took so far of the Zaurus and Sig3.

Different Views on Tech in Japan and USA

Traveling in the USA made me realize how different people here in the USA and back in Japan are about technology.

In Japan, there is a sense of having have to have the latest tech to keep up with people. Many people change cellphones every year, if not every few months. I think people in the USA have more desire to cherish their tech than Japanese people. There is a good and bad side to this, because when the cycle of tech is fast, more products can be made and sold. When the cycle is slower, the tech might get stale and not improve much.

You know, I try not to take ideas from other sites if I can help it but this one was too good to pass up. You already know that I like to post older commercials, and I have also been planning some "Retro Reviews", but a site that I really enjoy, The Gadgeteer has recently posted something I found really cool.

Here is the post, Do you remember? Fire up the Time Flux Capacitor… that gave me this idea. I posted in the comments that I have this site along with my two friends, Tsubasa and Alex. I do not really like to post the link to our blog on other sites, but since this was related to what I want this blog to be, I figured once and awhile cannot hurt. Right?

Well. To make a long story short, the post mentions some older stuff that they wish to discuss, such as the iPAQ line of PDAs, which I do own one of the newer models of, and even the old Palm Pilot has been mentioned in the comments. This is one thing that I really love to get into. I love older computers, but as you can see my real focus tends to be on the smaller side of the hobby. I LOVE to collect older PDAs since they are still rather useful for me, and that includes even my older ones like my Visor Deluxe and Visor Pro, but even my NEC MobilePro 780. The Visor was a common handheld to own, but how many people do you know that own something that not only ran Windows CE but was the size of a small notebook and is still called a PDA?

One of the things that as really intrigued me into doing this is the Sigmarion III that Tsubasa is sending me. I will have it soon, so I have been looking into software for it. One of the really cool programs is one I plan on doing a little section about it. I was given a CD before with Windows CE software on it, and I couldn't try this program into now since I needed an ARM CPU and my NEC runs a MIPS CPU. I do not want to get into it now, but the program is Softmaker Office 2006. There is a 2011 version that also runs on Windows CE as well but this is the one I have so it will be good enough for me.

This program is not what I would think of as being a typical PDA program. This office suite is almost like taking Microsoft Office for the desktop and making it run on a PDA. It can do everything that you can do on your desktop, but on a PDA. I do not know for sure that you can do EVERYTHING, but I can safely say that it sure as hell comes close to everything.

Please post in the comments about stuff that you have and remember using when it was the BEST THING EVER!!! I would love to read about it, and I will even let people submit articles for us to post on here. So whether you want to post a review, or even some pictures, or just a story about what you used to use, leave us a comment.

Sorry that I stole your idea Lim, but it was too good to pass up!
Posted by Mikey Pizano at 10:33 AM No comments:

Got to touch Xperia ray SO-03C!

Posted by Tsubasa Kato at 5:18 PM No comments:

Pretty cool IBM Linux commercial.
Posted by Mikey Pizano at 10:17 AM No comments:

This is a video I made back in 2009 comparing a Nintendo DSi LL and iPhone 3GS's browser.

I know that the Nintendo DSi LL has lower spec, of course, but to see how different it was to compare with the latest smartphone of that time is interesting.
Posted by Tsubasa Kato at 9:25 AM No comments: