I stocked the Nintendo Family Computer or Famicom today to sell on eBay. 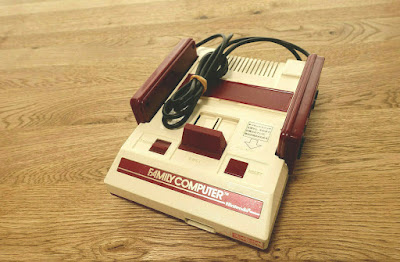 The cosmetic condition is very good.
I remember playing with one of these in my friend's house. I played the Legend of Zelda there. Listing on eBay: https://www.ebay.com/itm/164725319835
Posted by Tsubasa Kato at 12:36 PM No comments:

Posted by Tsubasa Kato at 5:09 PM No comments: 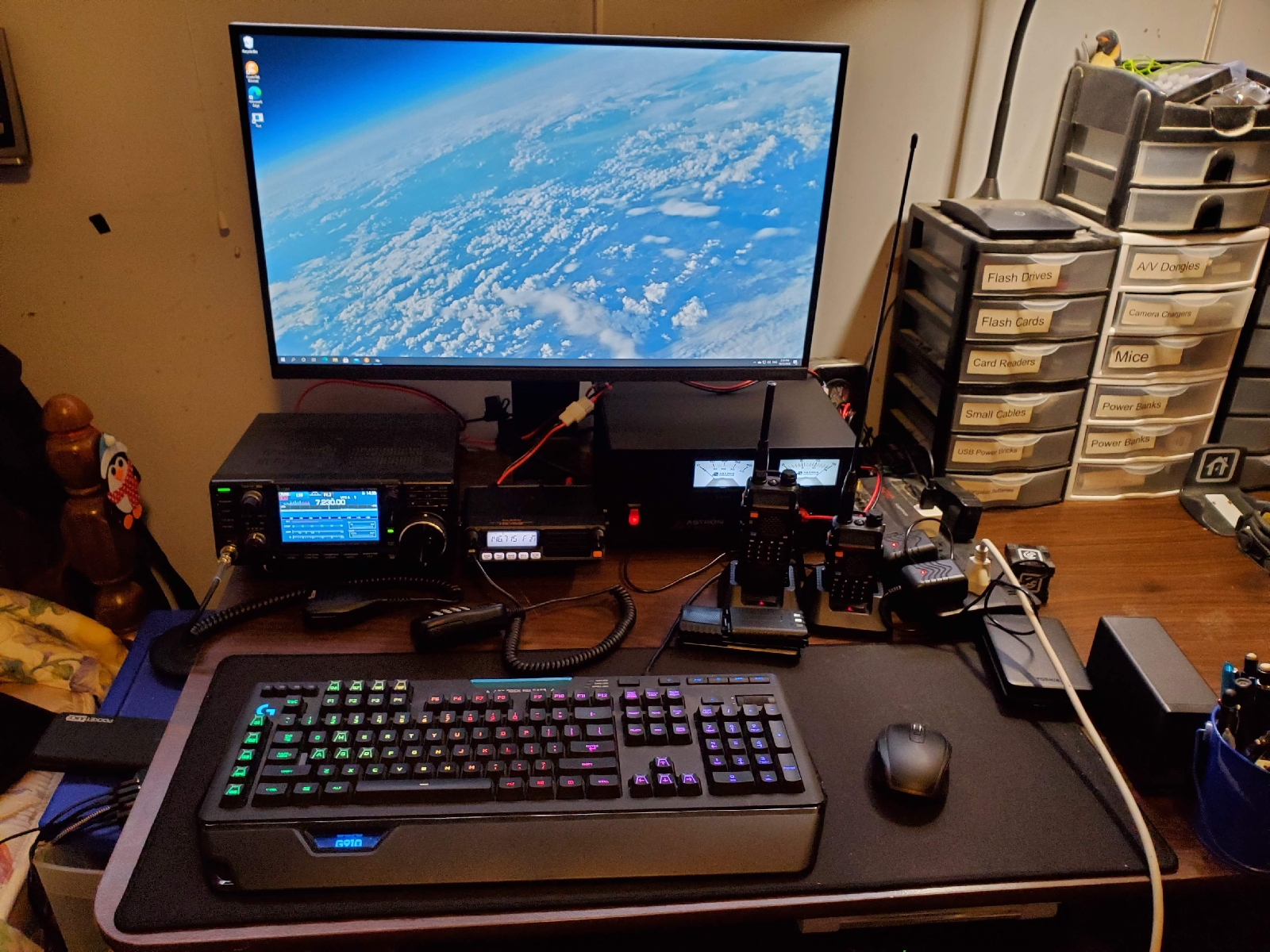 What does that mean? Well, chances are, unless you happen to be a HAM or know one, you are scratching your head wondering what foreign language I am speaking right now.

So, what does CQ mean and why am I talking like that? Simply put, CQ is a the term HAMs use to annouce we are looking for a QSO. Huh? A what? A QSO is a conversation between HAM radio operators. When I get onto HF (high frequency) bands such as 20 meters, I will find an empty spot where I hear silence, and ask twice, about 30 seconds or so apart, if anyone is using the frequency right now. If nothing is heard? I start calling out CQ, as I did above, every 30 seconds or so. As it sounds like when read aloud, CQ is "seek you" and an open invititation for someone listening to respond!

The purpose of this post, as you may have guessed, is about my journey into the world of HAM radio! There is quite a bit of crossover between the old technology we talk about here and HAM radio. That doesn't mean there isn't anything new and exciting in the radio world though. Current radios are a lot different than the old days. We have radios with color touchscreens, digital signal modes, and all kinds of fun bells and whistles! These aren't  the radios that your parents or maybe even grandparents used to use and tinker with. I wanted to start this post off with the most common thing you will hear, and maybe even transmit yourself, on a HF radio.

My journey into radio began back in 2008 in fact, but didn't actually get off the ground until 2020. Way back in the day, my dad had a Yaesu FT101ee that was used as a CB as he didn't have a HAM license. To get a license back then, much like today, you need to pass a test. Unlike today however, they didn't publish the question pools online to study, and part of getting the license was being able to do Morse code. They have removed the code requirement now though. We decided to take this radio home from my grandparent's house, so I started to look into being able to use it.

I spent a lot of time on IRC, using the Freenode server and the #hamradio channel. My first goal was to figure out the antenna. The hard part wasn't so much building one, but figuring out how and where I would be able to put the antenna. A simple antenna is a wire dipole, which is two pieces of wire, each a quarter wavelength long, with a transformer in the midde called a BalUn. A BalUn simple takes a balanced load to an unbalanced load. With something like the 160m band, that means an antenna about 260 feet long. I had someone who offered to send me an antenna, but we lost contact and I never did get it.

Eventually, other things took over and the radio was forgotten about, and sat under the desk. Sometimes, I would think about getting a Baofeng handheld but never actually bit the bullet and ordered one. Fast forward to July of 2020 where my dad mentions that with everything going on in the world, I should get one in case anything happened. I finally ordered one, with the extra extended battery, programming cable, and a whip antenna, for 50 dollars off Amazon. That prompted me to start looking into getting the test taken, and getting the needed license, to allow me to transmit.

I started looking around Facebook, and decided to put a post on a local community page asking the local HAMs what repeaters were the most active to listen to. I became friends with one, who was able to reach out to a local club in order to get me tested. I spoke to a few others, and tried finding a test, but it was in the middle of the Covid pandemic and most clubs were not doing in person testing. They have recently started doing online testing but it involved things such as having to use your phone and webcam, so I decided to wait for an in person test. In the meantime, I kept studying, using a website called Ham Study (www.hamstudy.org) as well as buying their app on phone. Any free chance I had was spent running through the question pools.

There are currently 3 levels of license. Technician is the basic one which allows you to get on the air with VHF and UHF radios, and some limited access to HF. The next level, general, opens up most of the HF, and extra, which gives you access to all portions of the bands. If you pass one level, they allow you to try the next one, so I was able to pass all 3 tests in one go. This means that I am an extra class HAM.

Upon passing my tests, the first thing I did was to order an Icom IC7300, which is 160m through 10m, plus 6m. I ordered everything needed to build an antenna, and besides the waiting for the BalUn to come, I also needed to wait for the FCC to assign and post my callsign, before I could transmit. It took 12 days from testing to be issued my call, but it can be much quicker when done through an online test.

My call, AC3GI, is a 2x2 callsign. Most will be in the 3x3 format, and they are assigned sequentially. I had the chance to speak to someone who had the callsign AC2GI. The number is a region code, since I am from Pennsylvania, I was assigned a 3. There are regions 0-9 for the United States, and other countries will have different formats. I have made a few DX QSOs, or contacts outside of my country, such as to someone in Germany.

The next radio I had bought was a mobile 2m and 70cm Yaesu FTM-7250D to use at my desk. A mobile radio will often put out 50w, compared to the typical 5w a handheld radio will put out. I ordered a Diamond x50a antenna and 75 feet of coax. On simplex, or radio to radio, without using a repeater, the extra power as well as the DB gain from the antenna, allows me to get my signal out much farther.

VHF and UHF signals, unlike HF, do not bounce, so you are limited to how far they will typically go. With HF, you can often get out rather far when band conditions are good. I was able to get into Germany on 20m, a good band during the day, with 100w and a simple wire antenna. I use an off center fed dipole, so instead of equal lengths, mine is 45 feet in the short side and 90 feet on the long side.

The Yaesu does a digital mode known as Fusion, or more properly, C4FM. I also have two DMR radios, another digital more. The TYT MD-UV380 and MD-9600, a handheld and a mobile, that do VHF and UHF. C4FM is far easier to program and there are some local repeaters here for both modes. The Yaesu also does something called Wires-X which is an internet link system. I have talked to people from the UK using this on a local repeater as well. You can also get little hotspot devices, which are typically a Raspberry Pi and a low power radio, to get into the internet link side of radio if there isn’t a repeater near by.

I hope you enjoyed reading about my adventure into the world of amateur radio, and maybe it will inspire you to get into this hobby as well! As we say, 73, which is shorthand for well wishes, I hope to catch you down the logbook, this is AC3GI, and I will be clear on your final.
Posted by Mikey Pizano at 11:17 AM 2 comments:

Posted by Tsubasa Kato at 1:12 PM No comments:

Famicom Network Controller HVC-051 is something I found recently and stocked on eBay.
I found a French video about it here:

Here's a documentation on this controller.
Enjoy!
Here is the eBay listing URL of the Famicom Network Controller HVC-051:
https://www.ebay.com/itm/154326081671
Posted by Tsubasa Kato at 7:15 PM No comments: