Note: This was written by Tsubasa Kato on Sigmarion3.com in 2007.

The best thing about the Sigmarion 3 is that it is very useful for making reports, editing text, and even surfing the web on the go. There are many enthusiasts all over the world, and since I am exporting Sigmarion III to users all over the world, they seem to be getting many new patches for the device created by individuals, on sites like HPCFactor. The best feature of this device is the instant on/off, unique to the Windows CE devices.


The light weight (455 grams) is very good, and it is much better than carrying a heavy laptop which sometimes can be about 3 kg.

You can use the Wifi at 54Mbps by buying the IODATA 54Mbps card or the Planex 54Mbps card. There are also many 11Mbps Wifi cards that are supported by this great device, including WLI-CF-S11G and WLI2-CF-S11G. You can also use SDIO Wifi card from Sandisk and such.

The best option for the Sigmarion 3 will probably be the extended battery, which is very rare and quite expensive. This allows 3000mAh of power, which means you can use for about 16 hours straight without recharging. This will make the Sigmarion 3 even more trustworthy, and you won't have to worry about bringing several batteries on the go, which will cause quite a bit of hassle.

Most people think the small factor of the Sigmairion 3 quite impressive, even after 4 years after its initial release (the device was put out of line in 2005). The display size is still impressive, being WVGA (800X480) instead of the regular VGA (640X480). Watching movie files on Sigmarion 3 is quite good, which you will need to use the TCMCP player available for free.

Also, there is a hack of increasing the video memory to 8MB, in which I found it to have some effect on the speed.

Overclocking the Sigmarion 3 is very easy, and can be done using a software, and it will increase the speed to 796 Mhz (unconfirmed). I tried overclocking it myself to 520 Mhz, which made the device faster, but a little unstable when connecting to Wifi. The utility I used is called xclkcfg.

I am hoping NTT Docomo or some other company will revive the Handheld PC device soon, because I am very sure there will be many new users who will find such device very valuable if they put out the latest OS on it. It will even be more interesting if NTT Docomo decided to make a Windows CE 6.0 upgrade to the Sigmarion 3, providing a ROM upgrade. I think they can even make the device over 100,000 yen. Personally, I am hoping that comanies other than NTT Docomo to make such a device, like Softbank or Au.
Posted by Tsubasa Kato at 1:23 PM No comments:

I ran Tubuntu Ruby (Trinux) on my Life Touch Note using Limbo PC Emulator. First, I had trouble running it because it had the old Limbo PC Emulator on it, but I fixed it by uninstalling and rebooting the machine.

shutdown command doesn't work so I used halt command to stop the OS. 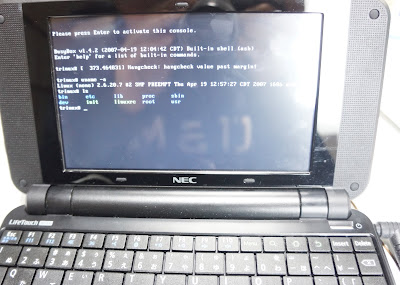 Posted by Tsubasa Kato at 9:44 AM No comments:

Email ThisBlogThis!Share to TwitterShare to FacebookShare to Pinterest
Labels: Linux


As you might know, Scheme is a computer programming language that is a dialect of Lisp. I've been fascinated with Lisp and Scheme ever since I borrowed a Japanese book from the local library called 「素数夜曲 - 女王陛下のLISP」which is translated as "Prime Nocturne - Her Majesty's Lisp". The book contains interesting Scheme tutorials and story of mathematics, and is a fun book to read.

The book is quite pricey, currently selling for 3,888 JPY or $32.17 USD at the current exchange rate.

EMONSTER S11HT is a perfect machine for scribbling Scheme because it has keyboard, which sadly most smartphones nowadays lack. The Internet Explorer is okay as a browser, but Opera Mini is more decent to use, so I use that to lookup Scheme tutorials.....

Until Next Time,
Tsubasa Kato  (stingraze)
Posted by Tsubasa Kato at 9:30 PM No comments: