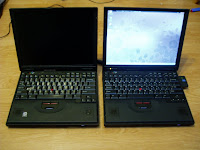 I picked up two old model ThinkPads over the last two weeks: a ThinkPad 600 and a 600X. I actually got the 600X first (pictured on the left) from my sister two years after I had given it to her. Despite having rebuilt the computer with a new keyboard, screen and palmrest when I gave it to her in 2010, it came back to me with loose hinges, keyboard missing a key and most of the keys didn't work. Screen started up pink as well. About a week later, I picked up a ThinkPad 600 for $10 and swapped the keyboard, hinges and screen from it to make the 600X much nicer to use and look at. With that in mind, the 600 (pictured on the right, powered off) shows almost exactly what the 600X looked like until a few days ago. With that in mind, the 600X is a fun little machine and it feels solid but this is at least the third time I've torn it apart for a major rebuild. I also wound up installing Windows Server 2003 on the 600X and made a few tweaks to the OS to make it more like a streamlined version of Windows XP with newer kernel. It's specs include a 500mhz Pentium III, 448mb PC100 SDRAM, 20gb hard drive, DVD-ROM drive, 13" XGA screen and 4mb NeoMagic 256ZX video chip. The machine gets regular use at the time being. Manufactured in July of 2000. The ThinkPad 600 is currently sitting around as a parts donor though I plan to eventually get around to restoring it to decent condition again. It has a 300mhz Pentiu II, 128mb PC66 SDRAM, 5gb hard drive, 13" XGA screen, 2mb NeoMagic 128XD video chip and a 1.4mb floppy drive. Currently has no operating system. Manufactured in February of 1999.
Posted by James K. at 4:10 AM No comments:

Recommended Link of the Day

Recommended Link of the Day: The Geeks Who Saved Prince of Persia’s Source Code From Digital Death

It's definitely worth a read. Apple ][ e and other cool retro gadgets' photos included.

Posted by Tsubasa Kato at 5:52 PM No comments: 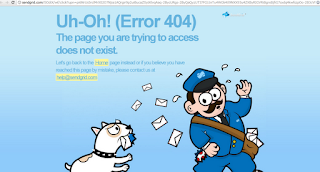 Posted by Tsubasa Kato at 10:37 PM No comments:

Email ThisBlogThis!Share to TwitterShare to FacebookShare to Pinterest
Labels: 404, Error 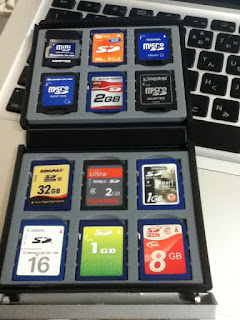 Sorry for rather bad quality photo. I took with iPod touch because I wanted to show most of my collection. I have 7 more cards I didn't show.

Email ThisBlogThis!Share to TwitterShare to FacebookShare to Pinterest
Labels: collection

Posted by Mikey Pizano at 11:12 AM No comments: 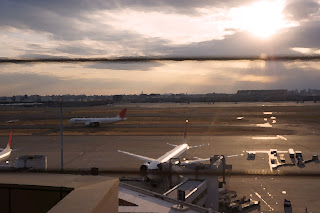 Today, I tried out some features of Photoshop Elements 10 on a picture I took with NEX-5N in Haneda Airport a while back. Click on the image to see the effect I put in. :)

Posted by Tsubasa Kato at 3:21 PM No comments:

Happy 404 Day! Take a look at this article, it will entertain you.
Posted by Tsubasa Kato at 5:55 PM No comments:

Email ThisBlogThis!Share to TwitterShare to FacebookShare to Pinterest
Labels: 404, Error


Thank you for voting! :) We will be putting up a new poll soon.
Posted by Tsubasa Kato at 7:08 PM No comments: