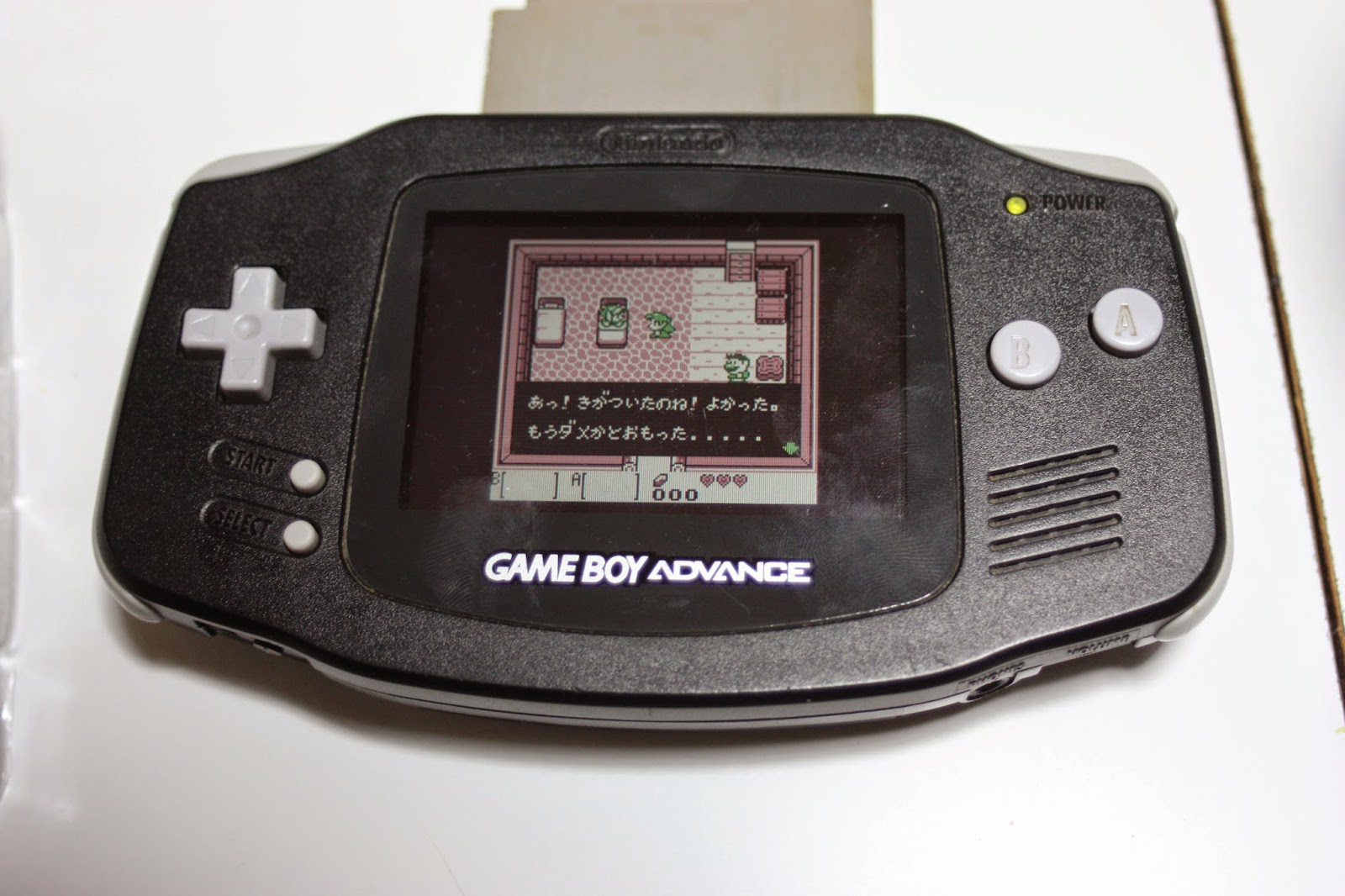 I've been a bit fascinated by GAMEBOY Advance and other GAMEBOY, since I like retro game and game consoles.

It also uses a Sharp TFT, which is amazing. I remember me wanting one a bit long time ago, but our parents didn't really want me to have a portable game console. I had only GAMEBOY Pocket and PS2 which I rarely played.

The interest for me now is that I want to someday run UNIX on it described here (yes, I mentioned it the other day too).  Which reminds me, maybe I'll buy another Sigmarion 3 to put some Linux on it...
Posted by Tsubasa Kato at 3:34 PM No comments:


Now the final three things, which would be the motherboard, processor, memory, which are being counted as one thing, and the two BlackBerry phones had also come from my good friend Nathan as well. Kind of funny when you think that a lot of the stuff came from one person but in different shipments.

The motherboard and other parts were given to him and he sent them to me so that I could seriously upgrade my aging desktop PC. I went from a 2.2GHZ AMD dual core to a blazing 2.66GHz quad core Intel! With FOUR times the memory as well. So while I am still using the same old 9800GTS graphics card, it is still one nice boost for sure!

He had also sent two old BlackBerries that he had found for me as well. One is a Storm 2 and the other is a 8900. There is not much too really say about these except that the 8900 is far nicer as it has a keyboard! Typing on the Storm 2 is far more annoying than it is really worth for me in the end.

I want to end this post, and the current series here by talking a little bit about the Droid 4. It is a slider device and is amazing for writing on as it has one of the best keyboards that I have ever used. It isn't the fastest, or the latest and greatest device out there, but it does the job.

You may have noticed none of these posts had pictures, and I would like to apologize for that. I will be doing reviews of the ones I didn't break soon, with a ton of pictures.
Posted by Mikey Pizano at 12:00 PM No comments:


The next three things came as a group, but one was bought locally. Technically, the local one is a part for the thing that came from a friend. Since this was a part for something else, I didn't include it in the original list of new additions.

I picked up a 120GB PNY SSD at Best Buy since a friend of mine wanted to do a trade. So he sent me a very nice Clie UX50 and ThinkPad X140e. In return, I am sending him back the NVidia Shield and a graphics card that he had sent me.

When he mentioned the trade, I was a little unsure what to do but I had given it some thought, and in the end, I was powerless to resist. Resistance is futile when you involve two of my favorite things! I will start with the Clie first since it was what really started off the trade. Originally, we were going to trade for just the Clie, and I was going to send him the Sharp IS01 I have, but then he mentioned the ThinkPad for the Shield.

Now, the Clie for me is special. Anyone who knows me well enough knows that this was the number 1 PDA on my list. I have wanted to get one of these for a good 11 years now but never wanted to spend the money on it. I am in love with it, and the fact that it is pretty much brand new made it even better yet! It was the one Clie that I have wanted most of all for the keyboard, but I have been spoiled by the Droid 4. That isn't to say I don't still love it mind you. I just need to use it more and I will adjust to it.

Even if I don't adjust, I can still use it to get my thoughts down faster than using onscreen keyboard on my Nexus 7 sadly. I have said it more times than I should have too but on screen keyboards SUCK! That isn't the point of this though, so moving on. It was the only landscape clamshell Clie, not counting the UX40 as the only difference was the lack of Wi-Fi. The other ones always used a portrait screen so they had a far narrower keyboard. Personally, I prefer the landscape in the case of only comparing Sony devices since I have had 3 other keyboard equipped Clies. They would be the NR70, NX70, and NX80.

This one uses the Sony Handheld Engine CPU running at 123MHz at most. The premise with this was the processor scales to the load to save battery life. This was also a way for Sony to get away from paying someone for a processor as well. Sony has always loved doing things they're own way though, like memory stick instead of SD card support, or using custom APIs for things like wireless and music.

This was due partly to the fact that the stuff was added by Sony to Palm OS, but also due to the fact that when Palm started to finally catch up, they chose to use their own API as well. This meant that when software like Pocket Tunes started to gain more popularity, it wouldn't run on the Clie models. Luckily, they did start using the Palm sound API in OS 5.2 Clie models. I need to check the UX50 later and see if that was one of the ones they changed it on.

The other thing that was in the box as stated was the Lenovo ThinkPad X140e. This one is still current and even had 110 warranty days left when I got it. The computer was used for 2 months before he gave the hard drive to a friend of his and put it away. Since he didn't get a drive for it, he let it sit in a box since. Since it requires a 7MM thick hard drive as opposed to the far more common 9.5MM drive, I had decided to opt for the SSD. It really is a better option anyway so in the end I am glad that I did but I would have loved to have a large spacious 1TB drive instead.

So by adding the 120GB SSD, I have a very nice and extremely well built little laptop. I love the thing, and it has great specs too! It runs on an AMD A4-5000 quadcore APU and has 8GB of DDR3 RAM, and with the SSD it really runs well.

Since it gets great battery life, and has a great keyboard, I really see this one being amazing for writing. It may end up replacing my Surface for some use, but one thing I know for sure is I still really love the Surface so this is more of a compliment to it.
Posted by Mikey Pizano at 11:46 AM 1 comment:


The last device, or what I should say what I had thought to be the last thing, was the one that came from Japan. I ended up getting more after that so it ended up not being the last after all. So cutting to the chase, the fourth device was the gift that Tsubasa had sent me for Christmas. I had sent him the iPAQ that he already posted about. What he sent me was also Windows Mobile based, but a phone instead of just a plain PDA like I sent.

It is a Japanese version of the HTC Touch Pro. This is a slider phone with a keyboard, which is why I was happy to get it. I have mentioned before that I have gone crazy trying different keyboards, so anytime I have the option to try one, I jump on it! For someone like me, I would be stupid not to right?

This one specifically is interesting since it came with a beta version of Windows Mobile 6.1 and would say "Not for resale" when booting, so it was likely a review unit. All in all, the hardware itself is interesting compared to other stuff that was for sale at the time. They put in a few neat things like while it had buttons on front, the area around where the directional buttons clicks, is also touch sensitive.

Rolling your finger around the select button will scroll in some programs, or zoom in most. When you use the camera on it, it acts like a real camera shutter button. Touching the select button will focus the camera, then you click it in to take the actual picture. Another neat thing is when you pull out the stylus, it automatically turns on. They put a magnet in that senses when the stylus is removed and holds it in place as well.

It's the little things like that in the end that really sparks my interest. When you think about the way phones are now, stuff like this isn't needed anymore sadly. The hardware is decent for Windows Mobile at the time, with a VGA screen, good bit of RAM and ROM, specifically 288MB of RAM and 512MB of ROM. It has Wi-Fi and Bluetooth as well, and runs on a Qualcomm 7201A at 528MHZ. I will get more into the details when I do a review later on.

The keyboard on it is for me, rather stiff, but it does work nice compared to some other ones I have tried over the years. Though to be completely fair, I haven't given it as much use as I should have, so I will need to do more before starting the actual review. The Dana has gotten the most use out of everything so far really.

The main issue that I have with it is that there is no 3.5MM headphone jack since while it does use a normal Mini B USB cable, the port is a special one that HTC used on a few other phones. It doubles as the audio jack with an adapter. While this does work, and I did get one from Brando when he sent the TYtN II, it annoys me since the phone is THICK and could have fit a 1/8" jack instead!

They did change this on the Touch Pro 2 as I recall, which is a lot thinner so it's kind of stupid really. It is the same way companies like Palm used a 2.5MM jack, when a 3.5MM would have not only fit but been a lot more useful. I know the excuse would have been that they didn't make wired headsets for 3.5MM then but they could have made them use the adapter instead. Especially when they had Bluetooth headsets, and so did pretty much every phone. But enough of that.
Posted by Mikey Pizano at 11:42 AM No comments: